It’s being called the largest act of global disobedience, with organizers across the Northwest throwing down together in just one of many actions across the world collectively known as Break Free. The moment is definitely worth celebrating and is revered for many reasons, a few of which 350.org, the instigators of Break Free, reflected on recently with lessons including: we’re more powerful together, we can be serious and joyful at the same time, make a place for everyone, and seize every moment and never give up. No doubt, these lessons are important to learn and Break Free overall was a positive experience for many. However, nothing is perfect and as young organizers building a powerful movement, analyzing the ways we can improve our strategy is an important use of our time.

Improving our work is always good, on principle, but not doing so actually has the potential to harm our progress. As organizers, we have limited time and resources. It’s a reality we feel every day in our work as we grapple with the balance of our biggest dreams with the capacity we actually have. Because of this, doing an action that is not strategic means we are not spending our limited resources doing something that is more strategic like attending Break Free vs attending an important research meeting with a decision-maker. It’s a personal call that campaigns need to make, but not being strategic can also have an impact on the communities we are supposed to be fighting for.

We will dig into it more later in the specific context of Break Free PNW, but our strategy should consider what message the goals of an action and the energy we spend engaging with local communities sends to those communities. Organizing against systems of oppression can be high stakes, and not being intentional often results in recreating those same oppressive ways we are fighting against instead of defaulting to a neutral good. This can seem daunting or we can see it as the amazing potential for power we can have if only we get serious about it. As Martin Luther King Jr. said, “Those who love peace must learn to organize as effectively as those who love war.”

QUALITIES OF A GOOD DIRECT ACTION

Break Free PNW did a good job of accomplishing most of these, attributed mostly to its sheer scale. Centering on laying the groundwork for a Just Transition, Break Free PNW’s main goals were named as “ratcheting up the pressure on the fossil fuel industry and politicians, and beginning a serious discussion about [the just transition],” and “shutting down plants that currently supply us with the fossil fuels we depend on,” according to the info shared on its website. Break Free PNW disrupted business as usual with its rail blockades and delivered a big message that got politicians and the industry to respond in some regions. Curtis Mraz, a NW divestment organizer who was arrested at Break Free felt the goal was to “exemplify how people will not stand for corporate global destruction,” a goal accomplished through the various ways folks could plug into the action and its large, multifaceted mission.

However, there’s also two common reasons that people do direct action but should not: highlighting a problem without a demand + just getting press. When it comes to analyzing Break Free’s impact, this is where there may have been missed opportunities. Demands are such a critical part of not only direct action but campaign strategy in general. There are some key things a good demand requires: a specific individual who has the ability to answer your demand (the target), a specific ask, and a timeline/deadline. When it comes to Break Free PNW, there was no individual target or even a small group targeted with an ask. The closest they came to naming one was “the fossil fuel industry and politicians,” but they gave them no timeline or a specific ask beyond taking steps towards a Just Transition. The problem: what does that even mean? Furthermore, when it came to the actual action and not just the website, the business as usual that was disrupted was for the two plants in Anacortes. That part makes sense because the people it cost money to were the industry and politicians being targeted, and in a language they care about. Action without a demand is at high risk of being simply a publicity stunt and that’s a problem because disobedience without demands is easily written off as a nuisance. Furthermore, in a long term fight like ours, people want to see results and vague messaging only gets us part of the way there.

HOW TO DO BETTER + BE BETTER

But if Break Free wasn’t as powerful as it could have been, what opportunities were missed that could have made it better. Firstly, tying the action to a specific demand would have made a world of difference. It is undeniable that those who have the ability to make the right decisions have been willfully ignorant, dragging their feet, and outright oppositional. However, just because they should know what steps they have the power to take towards the Just Transition, does not mean that they do and it creates a weak narrative to paint with a broad brush; especially when Break Free’s broad stroke was made of so many beautifully diverse campaigns. Some examples of solutions we could have demanded action on include: a moratorium on new fossil fuel infrastructure with the names of the politicians who have the ability to make that decision; or the same demand of a the CEO of one of the companies pushing for development; or action on an intersectional bill like Oregon’s Healthy Climate Bill. These are just rough ideas and coming up with a strategic demand takes research.

Secondly, intentionally craft a strong narrative and focus our energy on that strategic demand. Rarely are we able to get so many people together for a single action like this, and we have so much power when we do. I have seen reactions to direct action better than we could have expected when diverse representation converge on a single moment. By singling in on a specific demand, we are able to tell the many reasons that people think the demand is a good one. This creates a way for people hearing about the action to resonate in a lot of different ways.

Thirdly, use the action to build more power in the long-term. With a strategic demand and a strong narrative, we’ve created a shared moment for what the Just Transition can look like, and everyone can go back to their campaigns and build off of an action like Break Free to say, “But wait, there’s more!” Because the Just Transition is not one size fits all, and though we may share values, the specifics are exactly that: specific.

Overall, I would call Break Free and Break Free PNW a success. It is no small feat to pull that many people together, especially in the complex and intentional way that it was done. Curtis said his reason for attending was for the community building that happened across campaigns, and the main outcome he's proud of is the solidarity he felt throughout the weekend, especially while being arrested. I applaud everyone who did set the strategy for the action, all those who managed logistics, and everyone who took part in the weekend of action. The momentum we have built and continue building through individual campaigns and through collective actions like Break Free are exactly the reason we have to keep reflecting, learning, growing, and getting better. Going up against the fossil fuel industry is not easy and transitioning the economy is even more difficult; but the power we are building is a force to be reckoned with and I believe that we will win. 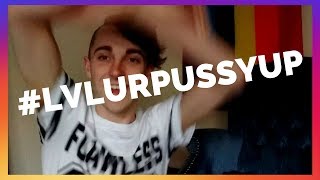 #LVLURPUSSYUP | JUNE 3: So Many Deaths

WHY OUR DIRECT ACTION MUST ALWAYS BE BETTER (ABRIDGED)